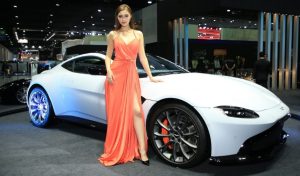 Mr.Komkrit Nongsawat, General Manager of Aston Martin Bangkok, said that “We are very excited to be unveiling the highly anticipated new Vantage, offering Thai customers afirst glimpse of the British marque’s latest sporting icon. This important milestone also underpins Thailand as a key emerging market in Asia, on the back of a successful sales performance in 2017.”

Aston Martin Vantage: The Successor to a True Sporting Dynasty

The heart of the Vantage is Aston Martin’s potent new alloy, 4.0 litre twin-turbo V8 engine. Set low and as far back in the chassis as possible for optimal centre-of-gravity and perfect 50:50 weight distribution. This high performance, high efficiency engine returns a CO2 figure of 245g/km yet develops 503BHP at 6,000 rpm and 685 Nm from 2,000-5,000 rpm. With a dry weight of 1,530 kg, this gives the Vantage formidable power-to-weight ratio- something vividly demonstrated whenever the throttle is squeezed. Meticulous tuning of the induction-exhaust system and engine management has given the Vantage a truly intoxicating character and soundtrack.

Exuding raw athleticism with its explicit look and intent, the everyday usable Vantage deploys its power and torque to the rear wheels via a rear-mounted ZF
8-speed automatic transmission, making it capable of doing 0-100 km/h in just 3.6 seconds and achieve a top speed of over 314 km/h. It employs a suite of integrated electronic systems to offer maximum control and driver enjoyment.

The new Vantage’s Electronic Rear Differential (E-Diff) heralds an unprecedented technological upgrade as it analyses the car’s behaviour, and reacts accordingly to direct engine power to the relevant wheel – from fully open to 100% locked in a matter of milliseconds.

Being an Aston Martin, the new Vantage features exceptional standard equipment versatility thanks to the In-Car Entertainment system-controlled and viewed via a centrally mounted 8” LCD screen – comprises of the Aston Martin Audio System, Bluetooth® audio and phone streaming, iPod®, iPhone® and USB playback along an integrated satellite navigation system.

Nancy Chen, Head of Sales Operations, Asia Pacific, said, “Vantage is an established sporting icon and we believe that this new model continues to deliver that same ethos. The second product of our Second Century Plan, the new Vantage is another important step towards the future success of our business and I hope that those who get a chance to view it will agree that this has the potential to become a real modern classic.”

Spurred on by last year’s impressive sales growth and improving buyers’ sentiments which have carried over to 2018, Mr. Komkrit also shared, “Aston Martin Bangkok anticipates yet another successful year ahead with the dual excitement of the latest product offerings and sustained interest in the Thai market. We also remain committed to delivering first-class Aston Martin Ownership experience to meet the needs of our Aston Martin clients.”

Visitors are welcome to visit the Aston Martin stand at Impact Arena, Muang Thong Thani from 28 March 28 to 8 April 2018.

Perfectly complementing the DB11’s existing 5.2-litre twin turbocharged V12 engine, V8-powered DB11 has provided the opportunity to reveal more of the DB11’s sporting character, while expanding its global appeal with a combination of exceptional performance and improved efficiency.

Rapide S: Agile, balanced and controlled; boasting a near perfect 49:51 front/rear weight distribution. Weighing just 1,990 kg with a powerful engine, it is a true sports car with 4 doors with world-class dynamics.

About Aston Martin:
Aston Martin is an exclusive luxury sports car company with a unique British heritage. The iconic brand fuses the latest technology, exceptional hand craftsmanship and graceful styling to produce pioneering models including the DB11, Rapide S, Vanquish S, Vantage S and Vanquish Zagato. Based in Gaydon, England, Aston Martin designs and creates sports cars offering style and performance which are sold in 53 countries around the world.

Founded in 1913, the Group recently launched its Second Century Plan for sustainable long-term growth. This is underpinned by the introduction of new models including the DB11, new Vantage, Vanquish replacement and an SUV, as well as the development of a new manufacturing centre in St Athan, Wales. In 2017 Aston Martin, which is privately owned, generated revenues of £876 million and employed 2,755 people.