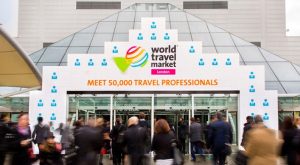 Book your hotel in London at the WTM Woirld Travel Market 2018 and around the world in 55 countries at best rates available. Pay at the hotel. Book now at HotelWorlds.com!

Also over from Iceland is tour company Guide to Iceland, which offers accommodation, packages and tours including Game of Thrones-themed itineraries for fans who want to visit the settings for some of the hit TV show’s most iconic scenes.

On the subject of the epic TV series, first-time exhibitor Brit Movie Tours counts its Game of Thrones tour, taking in filming locations around Belfast, as one of its best-sellers. Visitors to the UK and Ireland section of WTM can also find out about Brit Movie Tours’ wide range of other options, including Downton Abbey and London gangster tours,

Lewis Swan, director of Brit Movie Tours, explained: “I launched Brit Movie Tours in 2009 as the premier provider of TV and film location tours in London and the UK. As we approach our 10th year in business we felt it was time to have a presence at the premier meeting place for the travel industry to help take our business to the next level. We look forward to welcoming both existing and new customers to our stand (UKI360).”

New tourist boards and destination representation bodies at WTM London 2018 include the Armenian Tourism Development Foundation, which is keen to showcase itself as a hotspot for adventure lovers; the National Tourism Office of Djibouti, a mostly French- and Arab-speaking country on the Horn of Africa and Costa del Sol Malaga Tourist Board, which is boosting its profile with its first stand-alone exhibition space in addition to maintaining a presence on the main Spain stand.

In the Caribbean section, the British Virgin Islands Tourist Board, is returning to WTM London after a seven-year absence. The collection of 60 unspoiled islands that ‘pack the best of the Caribbean into one convenient destination’, will be updating partners on its recovery progress following devastating damage incurred by Hurricane Irma just over a year ago.

Ginny Hawksley, managing consultant for BVI Tourist Board in London said: “We are thrilled to be exhibiting at the WTM London. We feel it is incredibly important to support our trade partners and be present, as well as let the industry know that we are very much open for business and on the road to a full recovery after Hurricane Irma.

“The UK travel industry and friends of the BVI have shown significant generosity and support to the Hurricane Irma BVI relief efforts, raising funds, volunteering time and donating needed aid supplies. With this is mind the British Virgin Islands Tourism Board feels a great responsibility and duty to ensure presence at this incredibly important industry show.”

New regional representatives include Okinawa Convention & Visitors Bureau, representing the Japanese island in the East China Sea, which describes itself as ‘the portal between Japan and the tropics’. Also new is Tamilnadu Tourism Department, representing one of India’s 29 states, Tamil Nadu, famed for its Dravidian-style Hindu temples; beautiful sunrises at Kanyakumari, India’s southernmost tip, and its historically important capital Chennai (formerly known as Madras).

Twenty two years after the catastrophic accident at the Chernobyl Nuclear Power Plant in northern Ukraine, tour company CHERNOBYL welcome, which operates packages taking in ‘ultimate experience’ guided tours to the ghost town of Pripyat and surrounding region, is making its debut at WTM London.

New exhibitors from the accommodation sector include the Queen Elizabeth 2 hotel in Dubai, which previously sailed the oceans as the iconic flagship of UK cruise line Cunard.

Book your hotel in London at the WTM Woirld Travel Market 2018 and around the world in 55 countries at best rates available. Pay at the hotel. Book now at HotelWorlds.com!

Upcoming enhancements to the QE2 hotel, which is now docked permanently at Dubai’s Mina Rashid, include a swimming pool, gym and private beach.

Katie King, director of marketing for the QE2 Dubai said: “This is the first year that the QE2 is operating as a floating hotel docked permanently in Dubai, so attending such high-profile trade show is important for us to introduce the QE2’s new concept in our key markets. Given the QE2’s British heritage and her roots in Scotland, the UK is an essential market for us and is in fact our biggest outside of the United Arab Emirates, so exhibiting at WTM is a key part of our sales and marketing strategy.”

There are over 60 new exhibitors from the fast-moving technology sector all exhibiting in Travel Forward, the event highlighting the future of technology in the travel and hospitality industry, including Travel Ledger, an industry-owned and run B2B billing and settlement platform, built using Ethereum Blockchain technology.

Similar in concept to IATA’s BSP, Travel Ledger highly automates the travel purchasing and payment process along the entire distribution chain and will replace the current and mostly manual billing, reconciliation and settlement process to make it fast, easy and inexpensive to transact non-airline provided travel services electronically.

Travel Ledger CEO Roberto Da Re said: “After the initial development phase we are looking forward to WTM London and Travel Forward where we will be engaging with travel companies globally to raise awareness about the project and encourage companies to get involved with the continuing development effort, in preparation for the platform launch in 2019.”

Another payment method making its debut is consumer-focused Fly Now Pay Later, which describes itself as ‘the hassle-free way to pay for travel’.

Last, but not least, WTM London is welcoming a number of new exhibitors from the world of sport, including Wembley National Stadium and Manchester City FC.

“With new and existing exhibitors all waiting to do business with industry partners,
WTM London 2018 truly is THE event where Ideas Arrive.”